Indian culture is composite. There are various cultural threads. There is a lot of diversity in respect of languages, customs, habits, religions, professions, etc. But in spite of these variations there is a general feeling of “Indianness” which transcends all these differences.

Thus it is important to preserve and promote “Unity in diversity” and this had given rise to the core elements of the curriculum.

Core elements help in bringing about the synthesis of Indian people into one strong unit.

Seeks to acquaint students with the fight for independence and the rise of free India. To make them realize it was not just a political movement but also a social, cultural and economic movement. It aims to highlight the innumerable sacrifices of people from all social strata and to develop love and respect for the nation and independence.

To explain the Indian constitution to the students. It is not a mere set of rules and regulations but reflects our ideals, aspirations and hopes. It outlines the type of society we wish to build for ourselves. It enfolds our rights as well as duties as citizens and we need to be aware of them and abide by them.

Seeks to identify and associate ourselves with the ideals, aspirations, hopes, symbols, values of our country. To develop patriotism, national integrity, reverence for national symbols and love for democracy, national festivals, monuments, geography of the land, pilgrim places, etc. and all that make our country “Sujalam” and “Suphalam”.

Culture is a complex whole that includes knowledge, belief, art, morals, laws, customs and any other capability acquired by man as a member of society. This core element helps us understand our rich culture and heritage and the concept of unity in diversity.

To explain these concepts of how our country promotes equal rights for all, how government is of the people, by the people and for the people, and how all religions have the right to preach and practice their faiths.

We must propagate that men and women are equal and complement of each other and there should be no discrimination between the two on personal or professional grounds. Also to do away with traditional social evils such as the dowry system, child marriage, polygamy, etc.

Man and environment have a fast influence and bearing on each other. Each is crucial for the well-being of the other. Man is nature’s most important consumer as well as destroyer and we need to inculcate the need for protecting and nurturing the environment – be it natural, social or cultural.

This core element emphasizes on the eradication of social barriers like casteism, religion, rich-poor, superstitions, language, labour, etc. to realize the nation’s goal of an integrated and casteless society for progress of the nation.

India is a highly populous country and within the next decade it is slated to overtake China and become the most populated country in the world. Thus there is a strong need to exercise caution and promote the advantages of small families so as to curb the load and stress on our resources.

This core element aims to develop the ability in us to think rationally, objectively and scientifically and adjust to new circumstances and not just go by blind belief and superstition.

Importance of values – Social basis of framing curriculum in education

Values control man’s animal impulses through worthy interests, noble sentiments and lofty ideals. They are the bases for ..

The National Curriculum Framework 2005 aims to create a future generation who believe in the democratic system, values and is ..

What are the various models of curriculum?

Definition: A simplified representation of reality which is often depicted in diagrammatic form Models serve as guidelines to ..

Distinguish between Curriculum and Syllabus

We use two words Curriculum and Syllabus having same meaning in daily life but they have different meaning according to nature. ..

According to M.K. Gandhi, education is the development of all the aspects i.e. body, mind and spirit. So mind without activities ..

The following are the main characteristics of Child-Centered Curriculum: It is organized around the child, his personal needs and..

The two curricula are poles apart. Subject-centered curriculum provides knowledge with pupils remaining passive for most of the ..

Complete information on the meaning and principles of curriculum construction

Meaning of Curriculum: The term curriculum has been derived from a Latin word ‘Currere’ which means a ‘race course’ or a runway .. 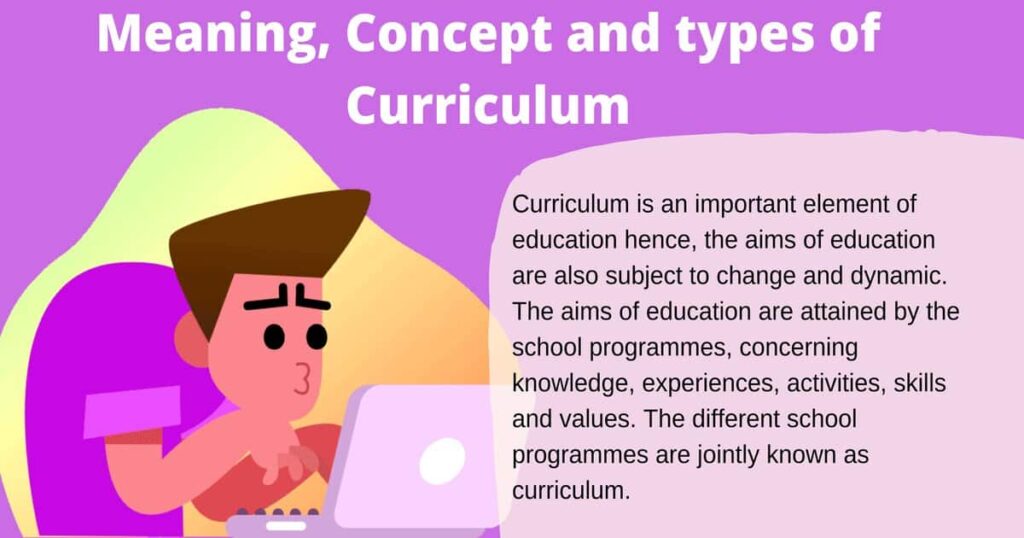 Meaning, Concept and types of Curriculum

Introduction: Curriculum is an important element of education. Aims of education are reflected in the curriculum. In other words..

Activity-centered curriculum is a modern approach in curriculum development

Meaning and Nature Activity-centered curriculum is a modern approach in curriculum development. It is a reaction against the ..

The National Curriculum Framework 2005 aims to create a future generation who believe in the democratic system, values and is sensitive towards gender, justice, understands the problems faced by Scheduled Castes and Scheduled Tribes, the physically or mentally challenged and actively participates in the economic, social and political progress and development of the country.

What are the various models of curriculum?

Definition: A simplified representation of reality which is often depicted in diagrammatic form
Models serve as guidelines to action. Models are found in almost every form of education. The education profession has models of instruction, of administration, of evaluation, of supervision etc.

Importance of values – Social basis of framing curriculum in education

Values control man’s animal impulses through worthy interests, noble sentiments and lofty ideals. They are the bases for individual, social, spiritual development and well-being of all.
The chief objective of Value Education is internal and external character formation. 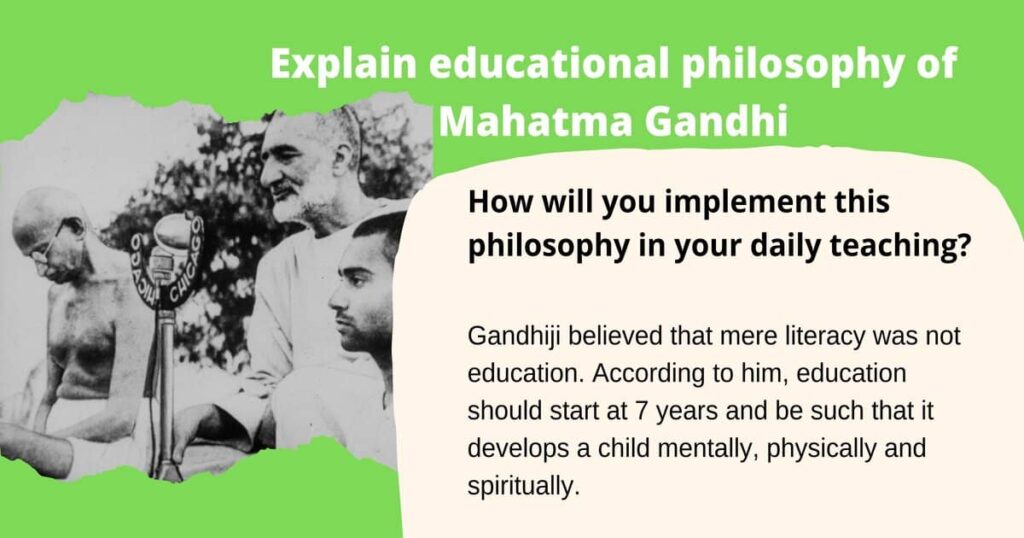 Explain educational philosophy of Mahatma Gandhi and how will you implement this philosophy in your daily teaching?

How will you implement this philosophy in your daily teaching? Write with examples.
Introduction
Mahatma Gandhi was born on 2nd October 1969 and was more famous in the political field but he was also known for his educational philosophy His principles of Ahimsa and Truth are still inculcated among the youth.