Heredity and environment play a vital role in the development

Heredity and environment play a vital role in the development of the personality of the individual. We cannot separate them into water-tight compartments. Both are interrelated and interconnected.

From time immemorial people have debated which is more important for personality: heredity or environment. Earlier the emphasis was on heredity expressed very often through the proverb “A chip off the old block”.

Later, with the spread of the Freudian point of view concerning the growth of personality disorders as resulting from unhealthy environmental conditions, the pendulum swung to the opposite direction and major emphasis was placed on the role played by environment.

However, modern researches have shown that every trait of the individual and his every reaction depend both on the joint impact of heredity and environment. In no way can the environment and hereditary factors be sorted out in two exclusive categories.

Conclusion: In short both are potent factors in the development of the child.

As in most aspects of development, there is always the question, which is more important for personality-heredity or environment. According to traditional views, the personality of the individual is believed to be a direct result of his heredity.

This is expressed in the saying ‘A chip off the old block’ because people were so certain that the child was born with a personality trait.

The child was permitted to grow up with such traits becoming stronger-effort on the part of his parents being directed towards trying to discover which side of the family was responsible for these traits; instead of putting the same energy into an attempt to correct them.

Later, with the spread of the Freudian point of view concerning the growth of personality disorders as resulting from unhealthy environmental conditions, the pendulum swung to the opposite direction and major emphasis was placed on the role played by environment.

Today, a middle-of-the-road interpretation is being accepted in place of the extreme views, which placed the whole emphasis either on heredity or on environment.

It is now rather generally believed that the foundation of personality comes from the maturation of heredity traits, but that these are influenced, partly through learning in connection with direct social contacts and partly, through conditioning.

Considering the bulk of evidence available, it may be stated that there is a definite operation between heredity and environment. There is a constant interaction between the hereditary and environmental forces on an individual and they operate in an integrated and collective manner.

Although the importance of the two may be relative only, it cannot be said that their operation is exclusive. Hereditary factor may operate differentially but this differentiation is determined by the environment.

All said and done, the relative importance of the contribution of hereditary and environmental forces in the development of an individual depends on many factors and it would contain an infinite number of possible answers.

In the process of development of the individual, interaction occurs within as well as between the specific factors in each of the two categories.

The importance of both nature and nurture for the development of the child is shown by many studies. The students of nature-nurture problem have tried to understand this question by studying the origin of differences in mental abilities, on the average, between various socio-economic groups, occupational groups, national groups, etc.

In various studies, nature has been kept constant and in others nurture. Studies conducted in 1960s have shown that generally both nature and nurture are significant even though the importance of each in terms of percentage is now indeterminate and may continue to be so.

Further Blatz and mill champ studied the mental growth of the Dionne quintuplets. The report states that these individuals, presumably identical, manifest differences in emotional and intellectual traits which the authors conclude have been environmentally caused.

Since mental ability is measured in terms of behavior consistent with our culture concepts of intelligent activity, the impact of environment cannot be considered inconsiderable.

Mental abilities, according to the present research evidences, are seriously limited in its development in an environment which is markedly deficient. Variations in cultural environment, including school in opportunities, are of great significance.

Educationally, this fact cannot be ignored for it means that many children can as a result of nursery-school experience, achieve a higher level of mental development that they could do without such opportunities. Improvement in the environment can improve a child and deficiencies in it would retard his many sided growth and achievement.

A recent publication by Schmidt has shown that many boys and girls can be spuriously classified as mentally deficient due to unfortunate and deeply rooted environment factors.

From the foregoing paragraphs, it would not be justified to conclude that one’s personality is a product of heredity alone. Environment also plays an important part in the growth of a person. Development in a person is related both to heredity and environmental influences and both determine overall growth.

The hereditary-environment controversy is reflected in empiricist-rationalist controversy. Empiricists, who emphasize experience, tend to play down the influence of heredity by stressing the crucial importance of experience. They compare the mind at birth to a blank state.

Ideas appear in the mind only when environmental impressions are received by it. They assert that there are no innate or inborn notions or ideas. Everything is learnt by sense experiences.

But this is only a one-sided story. Adaptive reflexes and complex instincts suggest that there are some inborn tendencies which predispose a person-to react to various stimulations in his own way.

Infants and children have individual ways of reacting to things. Talent is inborn. Training and special environment can develop it. Sense experiences cannot work independently of talent.

In short, it could be maintained that the effects of heredity and environment are interwoven from the time of birth and they cannot be isolated and studied in pure form. While the heredity determines the level, environment determines the functions of these abilities.

Environment means social, moral, economic, political, physical and intellectual factors which influence the development of the individual. All these factors mould and influence the behavior of a person from time to time. Two individuals born with the same biological heritage differ because of differing environments.

Environment is nothing but a process under suitable conditions to change the shape of a raw material just as a potter does while making toys of mud.

The truth lies in the fact that both environment and heredity are needed for the development of the individual. The practical gardener knows that both seed and the soil are necessary for the proper growth of a plant. He could never grow a good crop from a poor seed, no matter how rich the soil, nor even from the best of seeds sown in poor soil.

Just as the development of a plant depends upon the heredity present in the seed as much as on the environmental stimuli of soil, moisture and sunlight etc., much similarly the growth and development of the individual personality is the outcome of both these factors.

In other words the growth of the individual is the product of both environment and heredity. Without heredity, the individual will not come into existence at all and without environment it will not grow, it may result in still birth. All development therefore, depends upon both heredity and environment.

Importance of heredity and environment

Discuss relative importance of heredity and environment in child’s development Introduction Man is the product of nature and ..

1. Influence of physical development : Karl Pearson is of the view that the height of the child is influenced by the height of .. 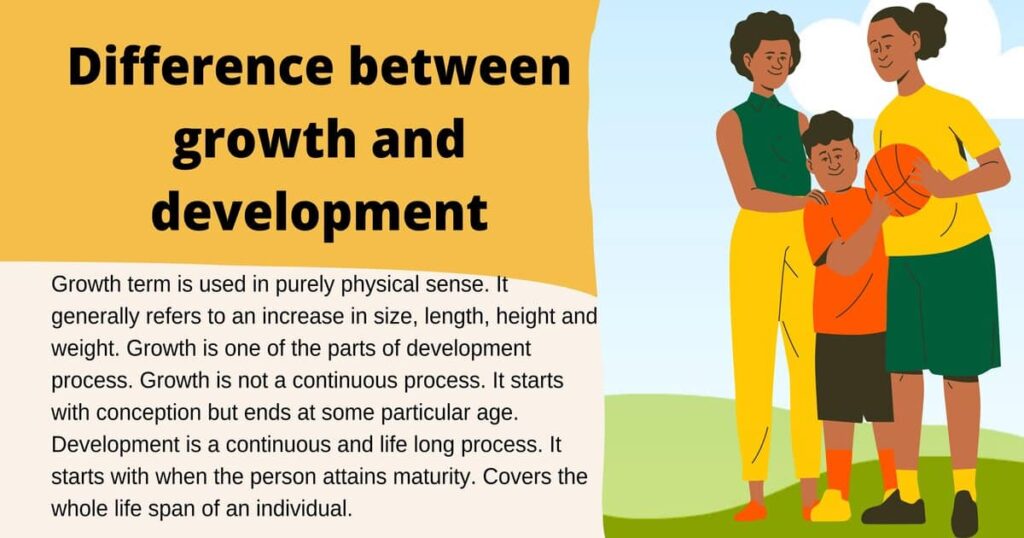 Difference between growth and development 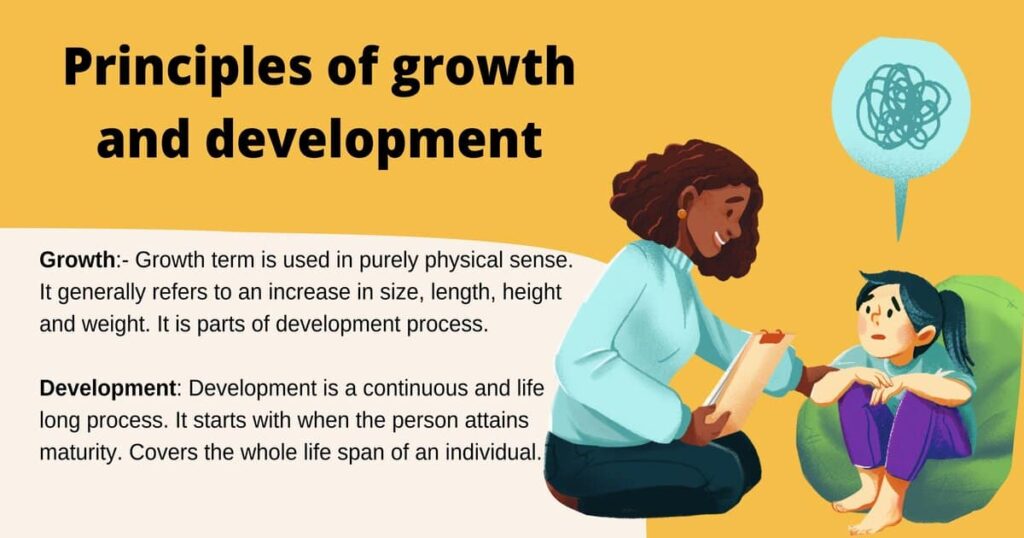 Explain principles of growth and development

Introduction
An understanding of the nature and principles of growth and development is very essential for the realization of the aim of education i.e. the maximum growth & development of personality – physical and motor development, cognitive, emotional, social development etc.